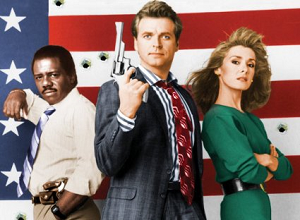 "Trust me, I know what I'm doing."
"Looks like you and I are the only sane ones here."
— Sledge, to his Magnum
Advertisement:

Sledge Hammer! is a television sitcom created and executive produced by Alan Spencer which ran on ABC from 1986 to 1988. It is an unrestrained Parody of the Cowboy Cop genre (Dirty Harry specifically), with David Rasche as Inspector Sledge Hammer, a cop who shoots first and asks questions never. He is partnered with Detective Dori Doreau (Anne-Marie Martin), and the two work for the ever-exasperated Captain Trunk (Harrison Page).

While Hammer respects his colleagues, his only true friend is his .44 Magnum Smith & Wesson Model 29 revolver, complete with customized grip and etched sledgehammer insignia. Hammer's affection for his gun is so deep that he showers with it, sleeps with it, and even talks to it.

The show was produced throughout the run by Alan Spencer Productions, Spencer's production company, and New World Pictures, an entertainment company founded by Roger Corman. During the first season, there was another production company involved, D'Angelo Productions, the production company of executive producer William P. D'Angelo. Spencer was only 26 years old when the show started airing, and he's still one of the youngest series creators and showrunners in the history of television.

The series received critical acclaim, but struggled in the ratings, largely due to its numerous time slot shifts. (It didn't help that at one point, the show competed against Dallas and Miami Vice on Friday nights.) Even so, Sledge Hammer! attracted up to nineteen million viewers who followed the show religiously, along with a very abbreviated Comic Book series from Marvel Comics, which was then owned by New World Pictures. Despite a season finale that ended with a nuclear explosion, ABC changed its mind and renewed the show for a second season. The second season suffered from another horrible time slot (against The Cosby Show) and a reduced budget.