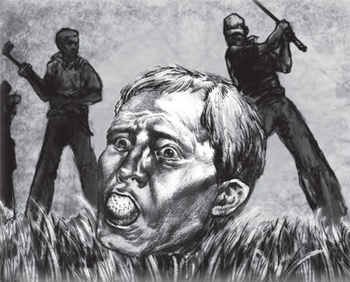 Do they yell "Forehead!" before the swing?
"If you let me go, you can use my friend's head as a polo ball."
— Emmett Fitz-Hume, Spies Like Us
Advertisement:

After violence, either to emphasize how much one character glorifies in it, or to lighten the mood, one or more characters will kick around a severed head as if it were a soccer ball. Alternatively, if there's a hoop conveniently nearby they may try to throw it in like a basketball. Other options are only limited by the number of ball games requiring something close to the size of a head.

Often also a side-effect of certain video game physics engines is to allow you to do this.

Reality check: A human head weighs around 7 kg (or for those living in the US, 15.4 lbs., which is as heavy as a bowling ball gets); however, few shows manage to portray this realistically.

Related to Off with His Head!. See also Decapitation Presentation for another fate of the severed head. Not to be confused with Head Sports.