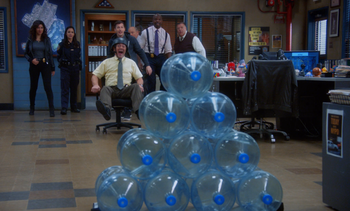 Redefining "going on strike".
Lenny: Oww! Unnecessary roughness!
Carl: So what? That's legal in Rollo Pollo.
Homer: I thought we were playing Cincinnati Time Waste.
Lenny: Oh, in that case...[hits Homer in the groin with his broom]
— The Simpsons, "Ice Cream of Marge (with the Light Blue Hair)"
Advertisement:

Characters in a Standard Office Setting (or equivalent) engage in some improvisational horseplay with the tools nearby. Sometimes this includes children's toys (like Nerf or wiffle balls), but usually they utilize some handy office supplies; stationary, paper, furniture, decor, old food from the fridge, job-specific tools, and more. They can make a ball out of crumpled paper or rubber bands. Notepads and small boards can be rackets. Brooms can become improvised hockey sticks. White boards or flip charts are used to keep score. Most people would get fired for these antics in Real Life, but in Fictionland, bosses tend to be more lenient.

Why do they do it? To kill time and avoid boredom. Also, it's fun. Not everything has to be taken seriously, especially career or work in fiction. And it can be surprisingly good team-building. It develops improvization and creativity. It builds camaraderie, competitiveness, and/or rivalry among characters. It can serve as characterization device because it shows the characters as goofy, silly or competitive. Some overachievers will be over-the-top competitive and people will very often treat it as Serious Business. More prim and proper employees refuse to participate.

A Wacky Startup Workplace might encourage this. This trope usually appears in Work Coms and it's almost always Played for Laughs. Can very well be Mundane Made Awesome.

Waxing the floor... Some see a problem, while others see an opportunity.

Waxing the floor... Some see a problem, while others see an opportunity.