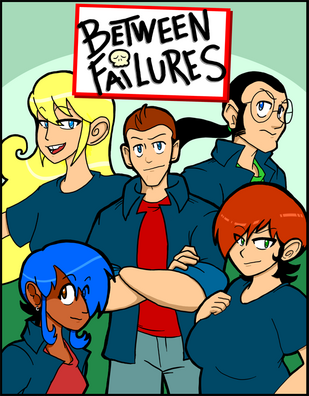 The main cast (sans John).
"My name is Thomas Blackwell. Years ago, I wanted to be a lot of things. Thing is, I'm a mediocre artist, and not much better a writer. Besides those aren't things people are successful at. Not people like me, anyway... Did college for a while. Turned out to be a waste of time... I think there are some professions where you either have it, or you don't. I spent a lot of time coming to terms with the fact that I don't. So... I'm a clerk, in a store that can't decide what to focus on. I don't know...I guess hope is something for other people. As far as I can see, life is just what happens between failures."
Advertisement:

Written by a self proclaimed fat, recluse Janitor.
Between Failures

is a slice-of-life webcomic following the (somewhat under-motivated and decidedly sarcastic) staff of a chain music-movie-videogame-bookstore. The primary protagonist is Thomas Blackwell, but it cuts to follow many members of the staff. It's often compared to Clerks, though up to the second volume, only two customers have actually been shown. The main focus is on the characters and the shenanigans they come up with to keep themselves entertained.