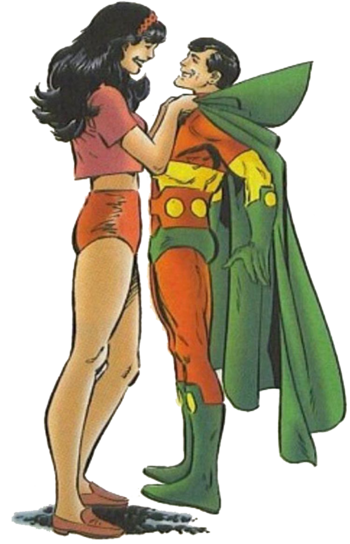 Big Barda's a whole lotta woman.
"My mind can’t quite get to the point of having lustful thoughts because I’m too worried about where I’m going to find a step-ladder at this time at night."
— Zero Punctuation on Bayonetta 2
Advertisement:

Women, on average, are shorter than men. And a good number of men find petite women charming. Because of this, in most human societies, tall girls and women often feel awkward and out of place, and some men will feel uncomfortable when it comes to having a relationship with a woman who towers over them, similar to someone stronger than them.

But then there are some women for whom this trope applies. These are the women whose overall charm comes from their height. Even if they themselves don't acknowledge it, the story and/or characters make it clear that her height is one of her distinguishing charms. Also, in fiction, tall women tend to be Tomboys and sometimes fall into the Action Girl archetype. Due to their extreme height, they will often have nice, long legs.

They are also quite common in the Superhero genre, where they also often have a Heroic Build and the Most Common Superpower. As with those tropes, tall heroines can be more the norm than the exception. Tall heroines have to be extremely tall to really stand out. Looking at published Canon references like DC's Who's Who and Marvel's Official Handbook of the Marvel Universe, one gets the impression that the average height for female heroes is something like 179 cm or 180 cm (between 5'10" and 5'11") (and that for male characters, it's about 191 cm (over 6'3")).

Please note that for a woman to qualify for this trope, she needs to fulfill two criteria:

Since men are usually taller than women, attractive male crossdressers will often appear this way, and the same is true for attractive Transgender women. On the other hand, in fiction, at least, an Easy Sex Change can often work around such limitations.

Not to be confused with Taken for Granite (although it may sometimes be combined with it!).

Some Statuesque Stunners are also Amazonian Beauties. Compare and contrast Huge Schoolgirl and Giant Woman. Compare Amazon Chaser, a guy to whom the attractive quality in a woman is her fighting skill and/or her muscular build instead of her height. Also compare to Big Beautiful Woman (which puts more emphasis on weight rather than height), and Brawn Hilda, who is muscular but unattractive. Compare to overlap with Tiny Guy, Huge Girl and contrast to Huge Guy, Tiny Girl.

open/close all folders
Anime and Manga
Comic Books
The DCU