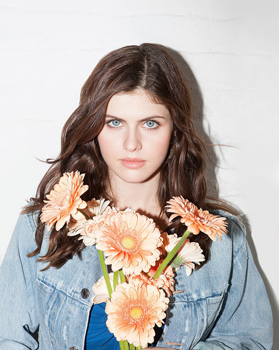 "Look into my eyes..."
Alexandra Anna Daddario (born March 16, 1986 in New York City) is an American actor and model, instantly recognizable for her striking blue eyes, which are quite mesmerizing.
Advertisement:

She's perhaps best known for playing Annabeth Chase in the Percy Jackson and the Olympians film series, but has since gained attention for her roles in film and television, such as San Andreas, Texas Chainsaw 3D, True Detective, and White Collar.

Her brother, Matthew Daddario, best known for playing Alec Lightwood in Shadowhunters, is also an actor as is her sister Catherine.

She occasionally pokes fun at her Ms. Fanservice status, mainly through her

Since 2020 she has been in a relationship with producer Andrew Form, ex-husband of Jordana Brewster. They announced they're engaged on December 2, 2021.