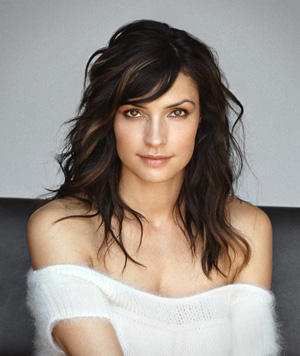 Famke Beumer Janssen is a Dutch-born actress. Though her birthday is disputed, The Other Wiki cites her as being born in 1964.

Apart from her native Dutch, Famke also speaks English and French, as evidenced by her acting career. Her early career was that of a model, after a failed attempt at an economics degree in Amsterdam (described by the actress as one of her stupidest moves). She also produced several TV commercials. In the 1990s, she moved into acting. Several almost B Movie-level roles passed, including one with Jeff Goldblum, before she obtained a role in an episode of Star Trek: The Next Generation, "The Perfect Mate". This was quickly followed by a role in the Clive Barker adaptation Lord of Illusions. Her big break came with the James Bond revival movie GoldenEye in 1995. Famke won the role of thigh-crushing assassin Xenia Onatopp.

Despite the potential pitfall of being a Bond Girl (there is talk of the curse that condemns many an actress' career, as seen with the output of over 50 percent of the actresses in the series after their Bond role), Janssen was savvy enough to not carve out an acting career based solely on blockbusters. After Deep Rising, she established herself as a talented indie actress, though she was notable for appearing in the creepy remake of House on Haunted Hill (1999). She then appeared in five entries of the X-Men Film Seriesnote the original trilogy, The Wolverine, and X-Men: Days of Future Past as Jean Grey, widely accepted as a decent portrayal of the character, despite the screwover she got during X-Men: The Last Stand — when X2: X-Men United clearly sets up the Dark Phoenix Saga, perhaps the most famed story from the comics.

Since then, Janssen has been notable for playing transgender life coach Ava Moore in Nip/Tuck and for her (finally!) leading roles in movies such as 100 Feet and Turn the River, as well as a role in Taken and its sequels.

She also plays the manipulative matriarch Oliva Godfrey in the Netflix original Hemlock Grove and led the spinoff from The Blacklist, The Blacklist: Redemption, during its only season in 2017.