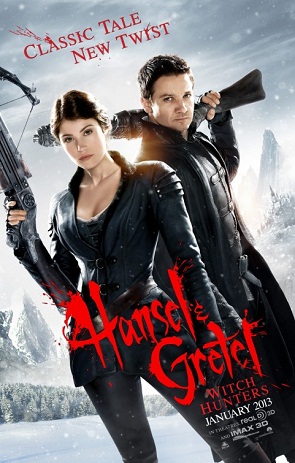 Hansel & Gretel: Witch Hunters is a 2013 action adventure film based on the classic fairy tale by The Brothers Grimm. It stars Jeremy Renner, Gemma Arterton, Peter Stormare, and Famke Janssen. It's written and directed by Tommy Wirkola, the director of Dead Snow.

Taking place fifteen years after the classic tale, Hansel and Gretel have grown into vengeful bounty hunters dedicated to exterminating witches of any kind. When the Mayor of Augsburg, Germany recruits them to rid the town and nearby forests of an evil sorceress — who is planning to sacrifice many local children at the witches' gathering during the upcoming 'Blood Moon' in two days' time — the siblings fight to stop the witches, discovering a strange conspiracy along the way.

and the red band trailer here.