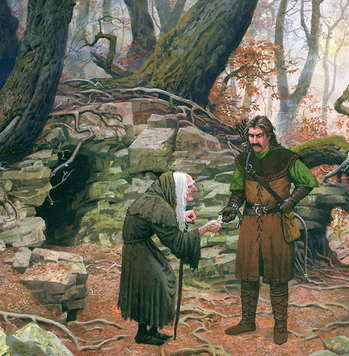 Out in the wilderness, probably in an Enchanted Forest, lives a woman with magical abilities. She may be a sorceress, witch (wicked or otherwise), demigoddess, supernatural creature in human form, or some combination of these. Whatever the case, she at least looks like a woman, lives apart from the rest of society, and has some kind of special ability.

She becomes important to the story when the characters decide to seek her aid, whether for information (achieved by scrying or prophecy) or magical service (a magical item for later, healing, removal of a curse, application of a protective enchantment, etc.) This aid may be given in good faith or as a means to her own ends; freely, or at a price. She may have interfered via a third party to bring the protagonists to her door, but she may also be sought out as a known provider of services, or simply someone the protagonists stumbled across in the course of their travels.

In order for the characters to encounter her at all, her solitude must not be absolute: perhaps she lives within walking distance of an otherwise normal village, maybe even right on the outskirts of town. She may be a friend of the community, visited frequently by its members according to their need, or be shunned and feared by them. This latter characterization is common of a Wicked Witch, who may even prey on the townsfolk, steal babies, etc.

Whatever her reputation, her abode will be a simple house or cottage, where she may have a familiar or bevy of servants, but no family members.

A notable exception to this trend exists, however: sisters. Specifically, three of them, often according to the pattern of The Hecate Sisters. Like the Fates, a typical trio of sisterly witches function narratively as a single unit and thus qualify as "solitary" for the purposes of this trope.

The Solitary Sorceress can be beneficial to the cast, malevolent—perhaps even the main villain of the story—or ambiguous, either serving her own ends at the expense of everyone else or giving aid only at great cost to the characters.

She is Older Than Feudalism — see Circe — and a stock figure of the Chivalric Romance.

This character type leans heavily female, but male versions do exist, usually living in a Mage Tower instead of a cottage. Hermit Guru is a related trope that is usually male. The main distinction between the Guru and the Sorceress is that while characters will consult a Hermit Guru for the kind of training, enlightenment, or wisdom that comes from years of discipline, study, and contemplation, they will consult the Solitary Sorceress specifically for supernatural aid.