Series / Legend of the Seeker 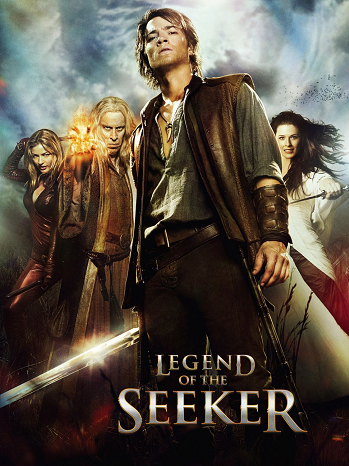 Legend of the Seeker is a Live-Action TV adaptation of the Sword of Truth series of books. Executive produced by Sam Raimi (who also served as an executive producer for Hercules: The Legendary Journeys), Robert Tapert, Joshua Donen, Ned Nalle and Kenneth Biller.
Advertisement:

The first season roughly follows the plot of Wizard's First Rule: there's an evil wizard named Darken Rahl, who wants to use the Boxes of Orden to take over the world, and opposing him are Zeddicus Zu'l Zorander, wise and sarcastic wizard of the First Order; Kahlan Amnell, a powerful, determined and idealistic member of the mighty order of the Confessors; and Richard Cypher, a kind woodsman full of compassion who is also an extremely capable fighter prophesied to become the True Seeker, using the mighty Sword of Truth to kill Rahl and save the world.

While the characters, setting, and central conflict are the same as the book, other aspects of the story were changed in adaptation. The series was canceled after its second season (and Disney (who produced the show through their distribution arm, Disney-ABC Domestic Television) later admitted that it was due to Sword of Truth fans complaining about every little change made while adapting the book), but a fan campaign

is going strong to try and fund a movie adaptation of the show.

It is notable for (despite insane amounts of Fanservice for both genders, sometimes quickly developed and impulsive plotlines and a lot of slowed down sequences) treating the matters of free will, extremism and responsibility very extensively. It is one of the rare works which has an undisputed place on the most equal level of the Sliding Scale of Gender Inequality.

Legend of the Seeker provides examples of: