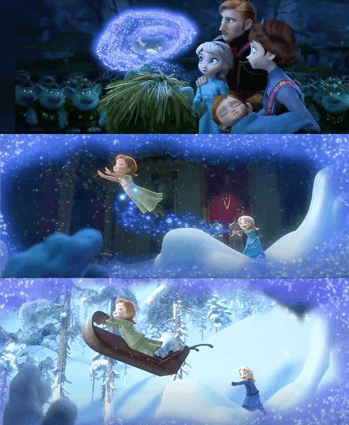 I recommend we remove all magic. Even memories of magic, to be safe. But don't worry - I’ll leave the fun.
Rouge: Do you actually believe that...you're the real Shadow?
Shadow: No doubt.
Rouge: Even your memories might not be real, you know?
Shadow: Even if my memories are not real, it's still me, Shadow.
— Sonic Adventure 2
Advertisement:

Sometimes when Laser-Guided Amnesia won't cut it, the villains, heroes, or The Men in Black need to radically alter a subject's very memories to ensure their Evil Plan, Epiphany Therapy or cover-up (respectively) works flawlessly.

In these cases they implant Fake Memories, using things like Psychic Powers, brainwashing, computers, or the week's Applied Phlebotinum to replace true memories with more convenient false ones.

Of course, this never works as planned. Like an itch they can't scratch, the character with tampered memories will notice things aren't as they should be and scratch at the false memories like a scab, questioning their "Past" and searching for the truth. Or go crazy trying. Occasionally, a hero will leave a Note to Self or instructions for friends to help. The irony being that the false memories tend to lead the character right back to the people who erased them with enough of an advantage to take them out. A darker, more sinister version of this trope is when the character in question realizes his memories don't add up, but doesn't know which set of memories is true. Often self-inflicted, these memories are slowly revealed through dream sequences, and the experience tends to come with An Aesop about the frailty of human mind and the subjectivity of memory.

Quite common in video games, probably because amnesiac heroes are extremely convenient for the format. Occasionally used as part of a more radical attempt at making someone into an Unperson.

Related tropes include Manchurian Agent, Memory Gambit, Amnesiac Dissonance, and Tomato in the Mirror. This is one of the potential methods used by the Backstory Invader (the other being full-scale Reality Warper). Compare Exposition Beam.