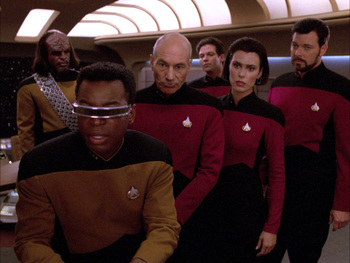 The crew check the Enterprise computer to find out who the hell they are. Also, who's that guy back there? Some Red Shirt?
Advertisement:

It's a typical day on the Enterprise. The ship is en route to an uncharted sector of space to make First Contact with warp-capable civilizations, Doctor Crusher is tending to a patient in Sickbay, Troi and Data are playing chess in Ten Forward, and Ro and Riker are kvetching in the halls. Things take a turn for the not-so-typical when they encounter a small spacecraft of unknown design. The ship releases some sort of strange scan that wipes the memory from everyone aboard the ship.

Our amnesiac heroes try to take stock of their situation. They quickly deduce that they're on a starship with the wreckage of another ship outside, but the ship's computer and many other systems are offline. Logic dictates they're the crew of a ship and they've just suffered some kind of attack. Assuming that he's in command due to his fancy baldric, Worf orders Riker and Ro to assess the rest of the ship while everyone else focuses on getting the ship back into fighting shape in case a new enemy presents itself.

Riker and Ro discover that the problem is shipwide. No one knows anything about who or where they are and have to guess through the circumstances they found themselves in. Crusher quickly figures out that she's a doctor, but Data assumes that he's a bartender because he was behind the bar when the flash hit. Troi realizes that she's empathic and seems to remember some sort of connection with Riker.

Geordi retrieves the ship's personnel files so they can figure out who is who. To his embarrassment, Worf realizes that he's just the security officer. However, the computer also says Riker is only second officer, while the random Red Shirt who's been hanging around for some reason is First Officer Kieran MacDuff. Who?

Now that everyone is in their proper place (?), the senior staff receive a presentation of what they've gleaned about their current mission from the restored computer: They are the crew of the Enterprise, flagship of the United Federation of Planets, which is at war with the Lysian Alliance. They're on a secret mission to destroy the Lysian command center. The memory loss they've experienced is a new Lysian weapon that's been disabling Federation vessels. The Enterprise's mission is a crucial one for ending the war, and they are under strict comm silence orders, so they can't verify any of this data. Despite some obvious misgivings, Picard orders the Enterprise to move forward.

Meanwhile, crew members are trying to get to some point of normalcy. Riker escorts Troi back to her quarters, where she expresses her unease: something about this whole situation doesn't feel right at all. Riker shares her unease, but he thinks it's just because they're at war; war never feels right. Bidding Troi a good night, Riker returns to his quarters... to find a provocatively-dressed Ro waiting for him. Well now...

The next day, the Enterprise reaches Lysian space. They are immediately accosted by a Lysian warship. Surprisingly, the ship doesn't immediately attack; in fact, they open a hailing frequency. Picard is about to answer, but MacDuff advises against it: this might have been what they did the first time. The Lysian ship gets tired of waiting for a response and opens fire, but its weapons are wholly ineffective, and a single phaser blast from the Enterprise destroys it.

Now that the Enterprise is killing people, Picard is even more insistent to get his memories back so he knows what he's doing. Crusher proposes some Techno Babble as a way of recovering the memories, and MacDuff volunteers to be a guinea pig, but he suffers some kind of seizure in the middle of the procedure (how convenient), so Crusher scraps the idea.

After MacDuff has recovered, he continues to beat the war drums. Picard has moral issues with blindly following orders to kill people he doesn't know, particularly against such seemingly weak foes, but MacDuff insists that everyone is counting on them to end the war and save lives. He then goes behind Picard's back to Worf, noting that they're alike and asking his support to override the captain should he fail to do his duty.

Meanwhile, Troi visits Riker to explore her feelings of familiarity with him. There's obvious attraction between them, and Riker discovers a loving note from Troi in a book he owns. They are about to share a tender moment, but then Ro comes in and breaks up the party, declaring that she thinks she's the jealous type.

The Enterprise steamrollers its way through Lysian space, and Riker notes that this seems far too easy. They reach the Lysian command center, with a crew of thousands and weapons that are a hundred years behind the Federation's. MacDuff urges Picard to destroy the station, but the captain has had enough. There is no way the Lysian Alliance could possibly be the mortal enemy of the Federation if this is how advanced they are. MacDuff, on the verge of Villainous Breakdown, tries to stage a mutiny, but he's quickly shot dead by Worf and Riker. In the process, his disguise is damaged: he's not even human.

In the aftermath, the truth comes out: "MacDuff" was a member of the Satarran race, the actual mortal enemies of the Lysians. He was using the Enterprise to bring a swift and decisive end to the decades-long war between them. And he very nearly succeeded: Picard muses grimly on the Lysians they killed while under the influence of this evil plan.

Now that she knows that the procedure is actually safe, Doctor Crusher starts to restore everyone's memory. Things are slowly getting back to normal—except for poor Riker. Rather than competing for his affection, Ro and Troi are having a girl's talk about him. They both teasingly make it clear that his dalliances with both of them are now over, and Riker is left a little bummed to go from two ladies to zero.

Tropes featured in "Conundrum" include:

"Take us straight through."

"Conundrum". The Enterprise approaches the Lysian defense perimeter and is attacked by sentry ships, and promptly blows them out of space with a rapid-fire spread of phaser blasts.

"Take us straight through."

"Conundrum". The Enterprise approaches the Lysian defense perimeter and is attacked by sentry ships, and promptly blows them out of space with a rapid-fire spread of phaser blasts.