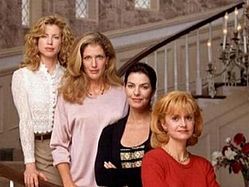 Sisters is an NBC series that ran from 1991-96. The plot revolves around four very different sisters from Illinois, named Alex, Teddy, Georgie and Frankie, along with their aging mother Beatrice, and the issues they faced day to day. It was notable for being the first primetime network drama to focus specifically on women and issues relating to them. The show was also notable for its multitude of flashbacks where the characters interact with or observe their younger selves, and for being a soap opera-styled drama that was also offbeat and quirky, a la Northern Exposure.