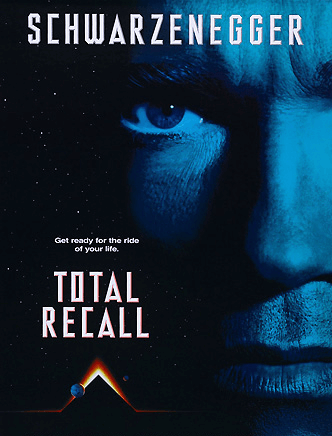 "Get your ass to Mars."
Advertisement:

Total Recall is a 1990 Sci-fi film loosely based on Philip K. Dick's short story "We Can Remember It For You Wholesale", starring Arnold Schwarzenegger, Rachel Ticotin, Sharon Stone, Ronny Cox, and Michael Ironside and directed by Paul Verhoeven.

On its face it's a sci-fi take on a spy thriller, set in memories implanted into a bored construction worker of the future... or is it? Because of all the Alternate Character Interpretation, the film is often called "The thinking man's action movie."

Douglas Quaid (Schwarzenegger) is tired of life in the year 2084. His literal life's dream is to get his ass to Mars as a way of escaping his humdrum existence. A commercial for the Rekall brand "Ego Trip" induces Quaid to try one of the trips, which are just implanted memories of a vacation that he'd never be able to take in person. Quaid elects for an enhanced set of fake memories that cast him in the role of a super spy—sort of a memory novella that he will remember living through. When something goes wrong with the procedure, he discovers that his entire life is a lie, and that in reality, he is a super spy working under deep cover. Or is he?

The viewer is constantly challenged to decide if Quaid's experiences are real or all just a result of his "ego trip." (Or are they?) The film is also well known for its special effects and over-the-top gore, like some other notable Verhoeven films. Highlights include tons of cool guns, three-breasted mutants, and a bizarre NES tie-in game.

A remake starring Colin Farrell was released in 2012. It's also a loose inspiration for the Total Recall 2070 series.

Tropes are not tropes— they're tropesnote No shit.: