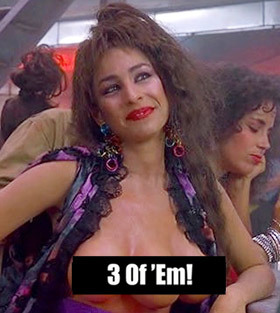 "You make me wish I had three hands!"
Beavis: Check it out, Butt-Head! This chick has three boobs!
Butt-Head: That's pretty cool. How many butts does she have?
— Beavis and Butt-Head
Advertisement:

Any female character with more than two breasts. The term originated (or at least, was popularised) by The Funday Pawpet Show's Simba, whose character, Arthur Bronswager, sings the parody song "Total Recallin'", which contains the line, "The best part was the girl with three breasts."

This is fairly common in parts of the Furry Fandom, mainly due to this being Truth in Television for most mammals. It's worth noting that this is almost exclusively done with female breasts—you'll probably never see a male furry with more than two nipples (unless this is a transgender or intersex person with breasts), even if he is in the same drawing as a female with more than two.

If it's a male character with extra equipment, you've got a Triple Nipple.