Graffiti of the Resistance 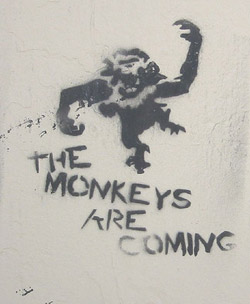 "What you're doing is a waste of spray paint. We live in a fascist police state disguised as democracy. You think you're gonna shatter that illusion by celebrating your own meaningless identities?"
— Buzzkill, Community, "G.I. Jeff"
Advertisement:

Crapsack worlds, especially Dystopian ones, tend to attract resistance movements, and sometimes they have to resort to crude methods to get the word out. Graffiti is one of those methods: it's easy to do, usually you can avoid getting caught doing it, and it's anonymous. Frequently uses the Icon of Rebellion.

The Color Underground's modus operandi is returning color to the world.

The Color Underground's modus operandi is returning color to the world.