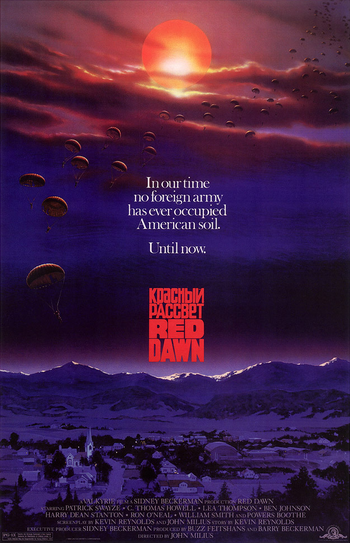 Red Dawn is a 1984 war movie written and directed by John Milius. A blatant product of the Red Scare, it was met with mixed-to-negative critical reception at the time of its release, but has attained cult classic status in the years since due to its amusingly unapologetic Patriotic Fervor and surprisingly grim second half.

Set in a world where communist revolutions and civil unrest have swept most of the USA's allies, the film opens on six high school students in a rural Colorado town whose school day is interrupted by what they soon realize are Soviet and Cuban paratroopers landing nearby. Panicked after seeing their teacher gunned down, they pile into a truck and flee into the mountains, led by football star Matt Eckert (Charlie Sheen) and his older brother Jed (Patrick Swayze).

Over the next several months, they are joined by fellow student Toni Mason (Jennifer Grey), her sister Erica (Lea Thompson), and downed US Air Force pilot Andy Tanner (Powers Boothe). Trapped far behind enemy lines, hunted by the occupation forces, and armed only with hunting gear and scavenged Soviet equipment, the group forms a ragtag resistance movement known as the Wolverines, named for their school mascot, and begins a long and harrowing guerilla campaign against the communist invaders...

Also noted for being the first onscreen pairing of Jennifer Grey and Patrick Swayze (who later costarred in the classic Dirty Dancing to the delight of fangirls everywhere), the first film to be released with the PG-13 rating, and (for fans of film music in general and Basil Poledouris in particular) the first soundtrack album released by Intrada.