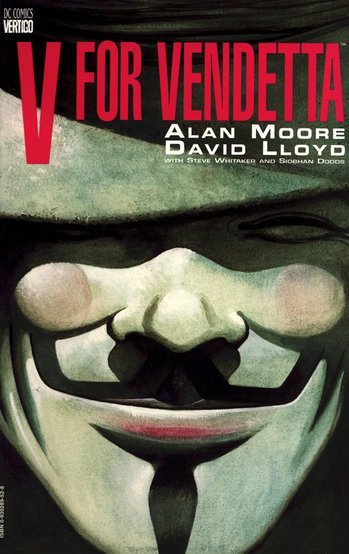 Remember, Remember, the Fifth of November,
the Gunpowder Treason and Plot.
I see no reason why the gunpowder treason
should ever be forgot.
Advertisement:

V for Vendetta is a comic by Alan Moore and David Lloyd. Starting in March, 1982, it originally ran in a British anthology comic called Warrior, and later in its own ten issue comic published by DC. It features several of Alan Moore's trademarks: Anarchy portrayed as a positive force, mixing fiction and historical fact, and large amounts of cynicism.

It's the late 1990s in an Alternate History, and Britain is ruled by the Norsefire Party, a Christofascist government headed by "the Leader", Adam Susan, that came into power after World War III broke out in 1988, during which the United Kingdom avoided getting hit by any nuclear weapons, apparently the only European nation to do so. Cameras are on every corner, surveillance vans roam the streets, and the government has long since rounded up any deviants or undesirable citizens that would otherwise taint the purity of Britain.

On November 5th, 1997, a young woman named Evey Hammond, with a job that pays too little to live on and no prospect of anything better, goes out after curfew to try her hand at prostitution. A run-in with a few rapist policemen is interrupted by a mysterious man in a Guy Fawkes mask, a man who kills several of the policemen and takes Evey to a nearby rooftop, giving her a spectacular view of his next act: blowing up the Houses of Parliament.

He later brings Evey to his Elaborate Underground Base, where he introduces himself as V. Though frightened by the man at first, Evey decides to join in his campaign against the ruling powers of Britain, one that quickly spirals from a few acts of destruction into something that threatens to plunge the entire country into anarchy - which is, of course, exactly what V wants.

Also featured in the story are several government officials and the people that surround them, and how the acts perpetrated by V affect their professional and personal lives. The regular citizens of Britain are also featured, for what V does to those in power affects them as well, directly or otherwise.

As noted by David Lloyd in his foreword in the collected edition, this is a story for people who don't switch off the news.

A film adaptation was released in 2006 with reasonably good reviews and box office success, though Moore, as with all other film adaptations of his works, publicly disowned it and asked to have his name removed from the credits. The BBC announced they were working on another adaptation in 2017, but little has been heard from it since.