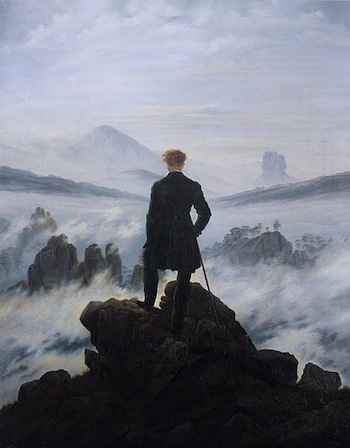 His soul is as turbulent as the sea.
"The Byronic hero, incapable of love, or capable only of an impossible love, suffers endlessly. He is solitary, languid, his condition exhausts him. If he wants to feel alive, it must be in the terrible exaltation of a brief and destructive action."
— Albert Camus, The Stranger
Advertisement:

The Byronic Hero is a character notable for being sullen, withdrawn, hard to like and hard to know, but usually possessing a rich inner life and a softer side accessible only to a special few.

This type of character was popularized by the works of Lord Byron, whose protagonists often embodied this archetype (though they did exist before him). This trope gained prominence during Romanticism. Rarely a true Hero, this character is more often an Anti-Hero (but can also be an Anti-Villain, or even just a Villain). Byronic heroes are charismatic characters with strong passions and ideals, but who are nonetheless deeply flawed individuals who may act in ways which are socially reprehensible, being definitely contrary to mainstream society. A Byronic hero is on his own side and has his own set of beliefs which he will not bow nor change for anyone; his internal conflicts are heavily romanticized and who himself ponders and wrestles with his struggles and beliefs. Some are portrayed with a suggestion of dark crimes or tragedies in their past.

Typical traits of the Byronic Hero

Vampires are often written as this kind of character, as a way to romanticize (and humanize) an otherwise disturbing creature. This is quite fitting, as Lord Byron himself was the inspiration for one of the first pieces of vampire literature, The Vampyre, by John William Polidori, Byron's personal physician. Oftentimes, to highlight their signature brooding aura, a Byronic hero will be compared with creatures that have dark, supernatural connotations, with demons, ghosts, and of course, vampires, all being popular choices. Love Tropes are often involved with this character, but almost always in a very cynical, existential way. Don't hold your breath waiting for The Power of Love to redeem him; these characters are more likely to fall victim to Love Makes You Crazy, Love Makes You Evil, or at the very least Love Hurts (unless he pairs up with The Ingenue, in which case you have a Brooding Boy, Gentle Girl pair).

He has a tendency to be The Unfettered, rejecting the morals imposed by society to accomplish his goals, and may overlap with the Übermensch, who shares the Byronic hero's sense of rebellion and superiority. Similarly, he could also be a Pragmatic Villain, as the two follow their desires without care for others, but nonetheless, have no interest in outright evil. He may actually acknowledge that his actions are evil, but state that there's no way to accomplish his goals otherwise. More overlapping tropes include Utopia Justifies the Means, which, like a Byronic hero's style, may be immoral or villainous acts in the name of some higher cause which would otherwise be a positive goal. The Lovable Rogue shares the Byronic hero's charisma, likability, and tendency to break the law.

They are quite often a Draco in Leather Pants, often in-universe as well, due to the magnetic All Girls Want Bad Boys appeal of this character. Frequently, a large part of their characterization involves being a Manipulative Bastard, a Deadpan Snarker, Crazy Sane, and/or Tall, Dark, and Snarky, perhaps with an Awesome Ego. A great number will also be Rebellious Spirits. In a Four-Temperament Ensemble, they will almost invariably be the Melancholic.

Not to be confused with a Classical Anti-Hero, a Tragic Hero or a Tragic Villain. Classical anti-heroes have many flaws but without any violent or sociopathic traits that Byronic heroes have. Tragic Heroes suffer from a specific sin in particular, which is treated as their Fatal Flaw, and are often well-intentioned or otherwise blameless. While both characters may ultimately be defeated by their flaws, the Tragic Heroes and Tragic Villains tend to suffer more for them in the end and include An Aesop. However, it's not unheard of to see characters who are both Byronic and Tragic heroes or are both Classical antiheroes and Byronic heroes.