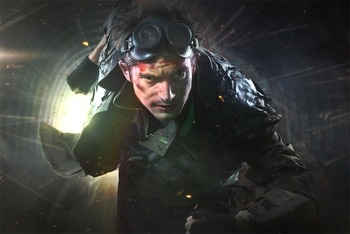 (The Visitor from the Future) is a French comedic Web series made by François Descraques about a time traveller from the future who always "warns" an ordinary guy named "Raph" about the impeding doom his (often ordinary) actions will bring to humankind. The plot gets more convoluted as time passes...

Four seasons have been completed. They have been subtitled into English

. Also, a comic book has been released in 2013. The fourth season has been strongly hinted to be the ending to the web series, but its universe will continue in other media. A novel titled Le Visiteur du Futur: La Meute (The Pack) written by Slimane-Baptiste Berhoun (Henry Castafolte's actor) has been published in 2014 (initially as a five-part online novel; the first one is readable for free) and is basically the show's fifth season.

A full-length movie, who was teased by François Descraques since 2021 was released in September 7th, 2022.