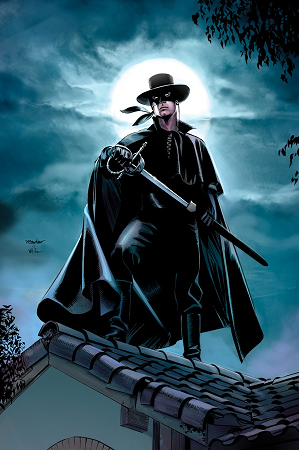 "A cloud of smoke and he appears;
The master of surprise;
Who's that cunning mind behind
The shadowy disguise?
Nobody knows for sure
But bad guys are out of luck."
— Darkwing Duck, "Opening Theme"

In the dead of night, an innocent's scream pierces through the darkness. The laughter of the wicked echoes through the streets, and with the click of a gun being cocked it seems that evil will take the life of yet another. But, all of a sudden, there is movement in the shadows. The alleys fill with smoke as the silhouette of a mysterious interloper rushes towards the would-be murderer. In a moment, the tides turn, as swift and severe punishment is meted out to the unjust. Suddenly finding their life saved, the grateful citizen looks to find their savior, only to find merely a passing shadow, gone just as quick as it appeared.

Yet another tale of the night, a tale that leaves criminals looking over their shoulder in search of the shadowy phantom whose swift justice is as mysterious as it is indomitable. A hero who is always ahead of his quarry, and who never fails to arrive when help is needed, coming from the shadows, turning the monsters' own fears against them.

The Cowl is The Cape with a dark twist and typically on the cynical side on the Sliding Scale of Idealism Versus Cynicism. Instead of adventuring in the daylight and showing themselves for the glory of the protected, they stick to the shadows of the night where evil lurks and prey on the fears of their quarry. The Cowl tends to be a Non-Powered Costumed Hero, their greatest assets being wit and psychological tactics, but if they do have powers, they tend to be related to darkness, ghosts, or some kind of sufficiently-creepy animal, such as wolves, bats, Ravens and Crows, snakes, spiders, or others.

Basically, The Cape protects the innocent, while The Cowl punishes the wicked.

See also Dark Is Not Evil and Anti-Hero. A common motif for the Proto-Superhero, particularly those originating in Depression-era pulp fiction.

Compare and contrast with The Cape. Sub-trope of Terror Hero. Compare Batman Parody, which is a more direct parody of the Trope Codifier, Batman, and thus uses many elements of this trope.