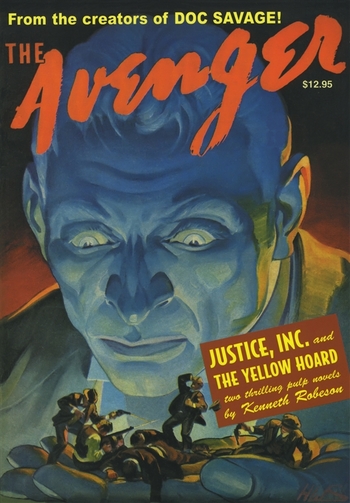 A man with a face as frozen as his soul, who battles super-crime so that no others should suffer as he has.

In 1939, Street and Smith, publishers of The Shadow and Doc Savage, decided to try yet another variant on the "hero pulp" magazine. To lure in the readers, it was advertised as being written by "Kenneth Robeson". The house name was in this case being used by Paul Ernst, though he was coached on proper pulp formula by both Lester Dent and Walter Gibson. The original The Avenger magazine ran from September 1939 to September 1942, with a few short stories by a different author (but under the same house name) running until 1944.

The Avenger was Richard Henry Benson, a compact but powerful man who'd made a small fortune as a professional adventurer, learning the many skills he'd later use to fight crime. At the start of the first story, "Justice Inc.", Benson has retired from adventuring and become an industrial engineer, devoting his off-hours to his lovely wife, Alicia, and adorable daughter, Alice. A family emergency calls them to Canada, and when no tickets are available, Benson forces himself and his kin aboard a small commercial plane already taking off, which he happens to notice has some empty seats. He promises to pay their fare upon landing.

In mid-flight, Benson uses the washroom, and on returning to his seat, finds his wife and daughter missing, as is their luggage. And all the other passengers and flight crew swear up and down that Benson got on the plane alone. As do the folks at the airfield from which the plane had taken off, and the taxi driver who'd brought them to the field! It's as if Alicia and Alice Benson never existed. The shock is too great for Richard Benson, and he snaps, attacking the crew until he is knocked out.

Benson awakens three weeks later in a sanitarium, and is startled to discover that not only has his hair turned white, but all pigmentation has left his skin, and his facial muscles have become paralyzed. He quickly talks his way out of the loony bin, then starts investigating the cover-up of the disappearances. He eventually discovers the truth behind the conspiracy, gaining allies along the way, but the true fates of Alicia and Alice are left just slightly open.

Deciding to continue fighting crime so that no others will suffer as he has done, The Avenger and his allies become "Justice Inc."

The Avenger often used gadgets invented by himself and his assistants, including advanced television, knockout drugs, blackout bombs and a souped-up car. But his most distinctive weapons were Mike, a streamlined .22 pistol, and Ike, a needle-sharp throwing knife, which he wielded accurately but non-fatally.

The series was reprinted in the 1970s, and had an additional twelve books written by Ron Goulart. Recently, a book of new short stories was published by Moonstone Books, and the series is again being reprinted.

In addition, there have been a few tries at a Comic Book series, and a short-lived Radio Drama.

Notably, after World War II, the radio producer discovered that it still had distribution rights to a radio program of "The Avenger", and created an In Name Only remake. In this program, the Avenger was biochemist and police scientist Jim Brandon, who'd invented a Telepathic Indicator that allowed him to pick up strong thoughts from a great distance, and the "Diffusion Capsule" which reacted with a serum to which he'd acclimated himself and "cloaked him in the black light of invisibility". Along with his "lovely assistant" Fern Collier and a frequently-baffled police inspector, Brandon investigated crimes in a blatant Follow the Leader of The Shadow radio show.

Also, the main character should never ever be confused with this other Richard (Philip Henry John

Tropes exhibited in The Avenger series: