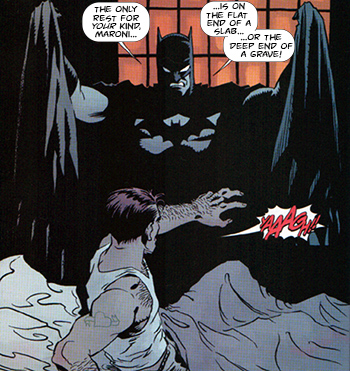 The master at work.
"I seek the means to fight injustice; to turn fear against those who prey on the fearful."
— Bruce Wayne, Batman Begins
Advertisement:

There is a common misconception that the use of fear and terror against one's enemies is a cowardly, evil method of fighting that no self-respecting hero should ever stoop to.

Not to these characters. To them, targeting a foe's psyche is every bit as valid a tactic as more direct methods. To do this, they prey upon a villain's fears, attempting to break them, thus making them easy prey. Often times, said character is either an Anti-Hero or someone who's a more clear-cut hero but isn't particularly nice, who uses these tactics as a way of turning fear on those who prey upon the fearful. Can be a very effective weapon for those with a no-kill code. Alternatively, a hero could just as easily exploit their frightening reputation as a means of scaring someone into submission. The terror hero typically tries to avoid direct combat unless no other options are present. In order to qualify, the use of fear and morale-breaking must be a standard tactic rather than something used once in a while.

There are several types of this kind of hero:

Compare and contrast with the Horrifying Hero, who is unquestionably terrifying to behold. The Terror Hero can be ordinary in appearance, but their tactics are frightening.

Compare the Guile Hero who uses trickery, cunning, and misdirection to defeat his foes. A Guile Hero may be clever enough to fake this sort of terror when a situation demands it.