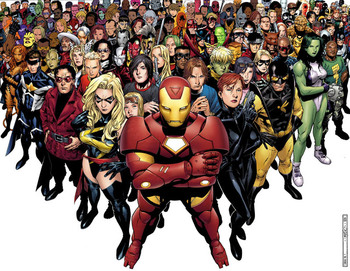 Following the events of the Civil War, Iron Man opens "Camp Hammond," a military base where heroes old and new are trained to be "proper" heroes. But as they say, the road to hell is paved with good intentions — and Camp Hammond has many secrets behind it, with many agendas working not to make better heroes at all...

Avengers: The Initiative lasted for 35 issues over three years (June 2007-June 2010). A Spinoff from The Avengers, initially based around Super Hero Bootcamp, the series would soon began to serve as a look at the wider Post-Civil War Marvel Universe from the perspective of C and D list characters. Some characters were new, some classic, but only a few major leading characters appeared throughout its run.

It often crossed over with other big events going on at the time, such as World War Hulk, Secret Invasion and Dark Reign, the later two of which enormously altered its status quo. It was succeeded by Avengers Academy, and many of its characters re-appeared in the Fear Itself tie in "Youth In Revolt."

The first twenty-five issues were co-written by Dan Slott and Christos Gage, until the end of Secret Invasion, when Slott went off to write Mighty Avengers, with Gage writing the remaining ten issues.

Not to be confused with Avengers Initiative, which is a tie-in to Marvel: Avengers Alliance for iOS and Android.

Tropes used in Avengers: The Initiative include:

NO MORE TROPES! BUT NOBODY SAID YOU COULD TAKE A REST! RUN, RUN, RUN!