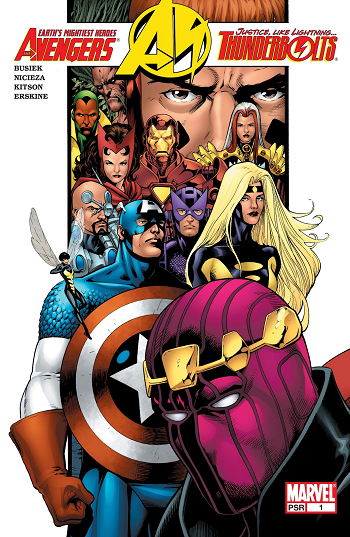 Avengers/Thunderbolts is a 2004 Bat Family Crossover between the The Avengers and the Thunderbolts, written by Kurt Busiek and Fabian Nicieza. The series lasted for 6 issues (May-September, 2004). The Thunderbolts comic book was cancelled at that time, but the success of the crossover allowed a new comic book, New Thunderbolts, which retrieved the original title some time afterwards.

In the story, the Thunderbolts take a proactive action against banana republics with Weapons Of Mass Destruction. The Avengers do not trust them, because they are led by Helmut Zemo, and spy on them in several ways. The Thunderbolts create a huge machine, the "Liberator", which would absorb all the dangerous energies of the world: atomic bombs, gamma boms, superpowers, everything. Captain Amerca does not trust them, and thinks it's all an Evil Plan of Zemo to Take Over the World. The Avengers storm into the Thunderbolts base and make a mess, igniting Moonstone's failsafe against Zemo, a code that channeled all the stolen energy to her. She gets nuts and starts an all-out fight with both the Avengers and the other Thunderbolts.

In the end, the machine is destroyed, Moonstone is left in a coma, the Thunderbolts break up... and Zemo escapes with the moon stones that made Moonstone so powerful.