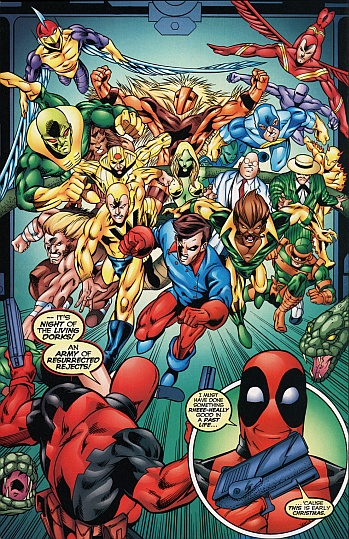 Deadpool loves his C-List fodder.
"Her name is... Veronica Crabtree, bus driver for the elementary school. She was considered an ancillary character, one the fans wouldn't miss much."
— Police Detective, South Park, "Cartman's Incredible Gift"
Advertisement:

This trope involves the cold realization that Shared Universes enjoy events, but not necessarily changing the status quo. Whenever a purported big shake-up occurs, you can bet it's your so-called "C-list" characters and below who will be brought out of the woodwork. Alternatively, if a given series is becoming less popular, given that they are less prominent, have less appeal, or aren't as easy to write for, these characters can be prime candidates for getting the axe, via the single-character subtype of The Firefly Effect.

An optimist will say this is because "minor" characters (and the authors writing for them) are allowed leeway to change more than big shots, and if they're lucky they can become newly popular due to this.

A cynic will say the main use of bringing in C-listers is so you can kill them off, creating a sense of "change" without really affecting the universe in any way, ruining the attempt to make an Anyone Can Die and Tonight, Someone Dies atmosphere when the only real deaths are these characters. Same with a Sacrificial Lamb.

This is a double-edged sword. It certainly can be shocking and emotional to fans of the character, but remember... the main people who recognize these characters are the same people who will be most angry if you kill them off, whereas those who do not recognize them will not care note  or worse, will think that the character was a new character created specifically to be killed off, which, if the trope is overused, may lead them to conclude that any new character is destined to be fodder, and refuse to get attached to them in the first place. Thus, you toy with the emotions of those who are likely to be your most dedicated fans.

Since newer characters tend to be more C-list than older characters, and also tend to include more females and minorities, this may lead to Bury Your Gays and Black Dude Dies First. (Although, on the other hand, outright Red Shirts tend to be straight men.) Another disturbing tendency in the comic book industry is to use teenage super-team characters as this. It works dramatically because of the impact of a child (or young adult) dying, but is over-used to the point where the Teen Titans actually hang a lampshade on this frequently. Similar young teams, the New Mutants and Legion of Super-Heroes, also fall victim to this with regularity.

And anyway, it's not as though the character is being used anyway. Being brought Back for the Dead is better than not being brought back at all, right?

When the character has the shortest, smallest, most stereotypical background possible (especially ended by a He's Dead, Jim to show he's really dead), we're probably dealing with a Red Shirt instead. If one of these "major" characters were created so they can be killed then it might be a Mauve Shirt.

Often leads to cases of Forgotten Fallen Friend. Compare Like You Would Really Do It.