Body of the Week 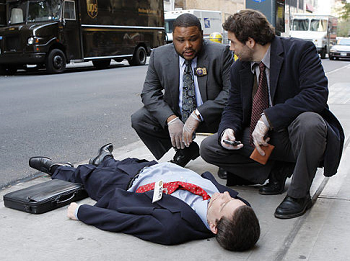 A subtrope of Victim of the Week.

Some weekly TV shows revolve around dead people. A homicide unit is pretty boring without a dead guy to investigate. A coroner needs someone to cut open. A funeral parlor that has no corpse is just no fun at all. Thus, these shows feature a Body of the Week.

Most shows of these genres open with a living person who goes on to die early in the episode. On most of these shows, the dead body is implicit. You don't actually need to see the corpse to know that it exists. On others, the body becomes an integral prop. A funeral home needs a casket and mourners to interrupt the family squabbles.

All these shows have in common is the need for a corpse. Every single week.

In every episode, the special guest star is killed during the opening sequence!

In every episode, the special guest star is killed during the opening sequence!