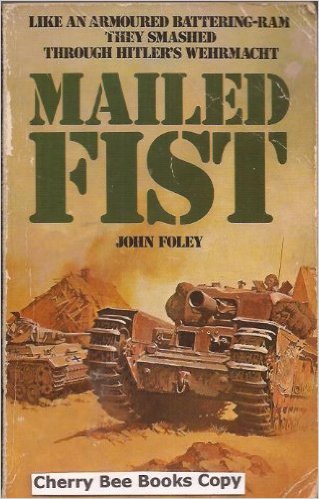 The only cover art to feature a Churchill Tank. Note the over-excited blurb. note And even this is wrong: it appears to show a Mk IV demolition tank issued to the Royal Engineers...
Advertisement:

This is an Embellished Slice of Life autobiography by Major John Foley of Britain's Royal Tank Regiment, detailing his wartime service between being commissioned as an officer, commanding a troop of Churchill tanks, and leading them in battle between June 7th 1944 and the end of the war in Europe.

Foley describes the intensive nature of pre D-Day training, fondly depicts the men he commanded, (who largely survived the war intact), and the experience of leading a small armoured unit in battle. On the way he discusses the absurdities and bureaucracy of the British military, describes what it is like to be defeated against superior odds in a tank engagement, deals with the melancholy of losing men killed in action, and vividly describes armoured combat in a variety of tactical situations and climates. The chapters describing (minimal) British participation in the Battle of the Bulge are more to do with fighting intensely cold and hostile winter conditions rather than the Germans, and the climax of Foley's war, crossing the Rhine against determined German opposition, is extremely well written and described on the page.

When still available this is thought of as a classic in describing small-unit combat and all-arms co-operation.

A heavy mailed fist drops on these tropes: