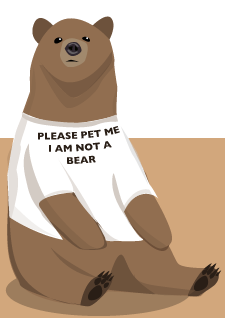 No, we're not going to Describe Blatant Lies because... This page is blank! There's nothing to see! Definitely nothing, especially a page describing blatant lies! Goodbye!

So one of the characters has a secret, one that they do not want leaking out. Unfortunately, Clark Kenting doesn't always cut it, and some aspect of the secret is going to be glaringly obvious no matter what. So they have to come up with an excuse for their situation, and tell a lie.

Similar to A Wizard Did It, but instead of hand-waving some implausible aspect of the series, the character is the one doing the hand-waving to another character.

In the ideal version of the trope, most people accept this because of their built-in Weirdness Censor, or because it's executed as a Seamless Spontaneous Lie. When it fails, you get That Liar Lies followed by Implausible Deniability. May or may not involve hesitation. Will almost inevitably accompany any Paper-Thin Disguise or Most Definitely Not a Villain. Often delivered by a Bad Liar. Suspiciously Specific Denial is a subtrope. See also Metaphorically True and Insistent Terminology.

Some statements that are true "From a Certain Point of View" may be blatant lies. A "Blind Idiot" Translation can also turn something that SHOULD be true into a blatant lie or vice versa.

In Real Life, this is the most offensive form of turd polish.

To be confused with Sarcasm Mode. Do not contrast with I Lied, which is when a character outright lies, but the lying is not blatant. Refuge in Audacity covers the cases when this ploy actually works. Obviously Not Fine is a subtrope. Compare Confession Deferred, in which the truth is uncovered after lies.

Nope. There are no examples.

open/close all folders
Advertising is out of stock.
What Asian Animation would be mentioned here?
Audio Plays? Never heard of them!
Duh, this isn't the Comic Books section.
No way Comic Strips could be here. Goodbye!
Fairy Tales are nowhere to be seen.
Fanfiction is history.
Sorry, there's no folder for Animated Films.
Jokes. Nope. Haven't seen 'em.
Music is not home; he's away for a while.
Not Pinball
There's nothing Professional about the Wrestling in this category.
No radio-based works here, no sirree, Bob!
Where's Stand-Up Comedy, you say? Nope, haven't seen 'em.
Tabletop Games isn't on hold right now. Bye!
Not Theatre here. It has moved on to another life.
Theme Parks are all just an elaborate illusion.
Web Animation hasn't even existed yet.
No such thing as Web Original
Real Life is dead!
Scroll Down for nothing
Feedback

Stan, bored by Dipper and Soos's attempts at stories, recounts his own ludicrous adventure of his taking the field in the "football bowl" and scoring the winning touchdown, earning the respect of his college student teammates and Footbot, a robot he built as a surrogate son. The others quickly interrupt this ridiculous tale

It's Just A Leaf!

Stan, bored by Dipper and Soos's attempts at stories, recounts his own ludicrous adventure of his taking the field in the "football bowl" and scoring the winning touchdown, earning the respect of his college student teammates and Footbot, a robot he built as a surrogate son. The others quickly interrupt this ridiculous tale

It's Just A Leaf!