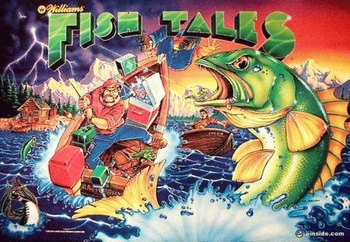 "You're not gonna eat that, are ya?"
Catch 'Em All, Hook, Line and Sinker!
Advertisement:

Fish Tales is a 1992 pinball game made by Mark Ritchie for Williams Electronics. The game, obviously, is based around fishing and the act of lying about the size of the ones you caught.

Among the more notable features of the game include a plunger shaped like a rod, a fish topper that shakes its tail when the player accomplishes certain goals, and flippers with lightning bolts on them that are 1/8th inch shorter than regular flippers, adding an element of challenge that was used on very few machines.

It sold more than 13,000 units, making it one of the top 20 most produced pinball games of all time. A digital version was available for The Pinball Arcade until the WMS license expired in July 2018. However, on September 4, 2018, Zen Studios announced that it had gained the rights to this and other WMS tables to be released within Pinball FX3. In particular, this and three other tables (Medieval Madness, The Getaway: High Speed II and Junk Yard) are the first to get this treatment.