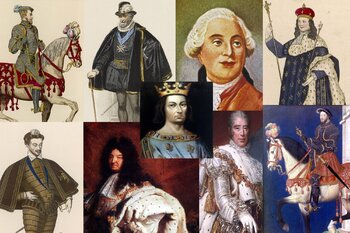 The original inhabitants of the land we now know as France were a motley combination of Celts (called Gauls by the Romans), Germanic tribes, and Basques, later joined by Romans. The Romans controlled the province of Gallia for 500 years, until the Franksnote A successful federation of Germanic tribes which originated in the Middle and Lower Rhine Region., in the person of King Clovis I, defeated the last Roman governor, Syagrius.

Frankish law and tradition had a significant effect on the succession compared to other realms:

The title is translated "I am the state", a phrase famously, although incorrectly attributed to Louis XIV, King of France, a.k.a. 'the Sun King'.

Monarchs and important state figures with their own pages:

For the five French republics, as well as all the other French regimes since 1789, see French Political System and The Presidents of France.

The Merovingians: (Like That Guy In The Matrix Reloaded)

Clovis's descendants were the Merovingian dynasty, France's first ruling family. Clovis was a great king, though a bit on the manipulative side, but he had four sons to split the kingdom he left behind: four sub-realms, each headed by a king, with the High King hanging out in Paris. Naturally, all of Clovis' offspring saw themselves in the top spot. Bloody feuding ensued, even descending to nephew-murdering, as the kings fought for power.

They're pretty much all throne-warmers after this point. From Sigebert III and Clovis II through the end of the dynasty, the kings were powerless (and rather short-lived) and the REAL power lay with the maires du palais ("mayors of the palace").

The Carolingians: Charles in Charge

After Charles "It's Hammer Time" Martel, son of a maire du palais and poised to take over the mayorship himself, turned back the Moors at the Battle of Tours in 732, the long-standing mayoral grumblings about having the power of a king but not the title reached a flashpoint. What with the ass-kicking Charles Martel comparing rather favorably with the terminally boring King Theuderic IV, Charles' son Pepin had the idea to become king himself and got the pope to agree. Childeric III was forced to abdicate in favor of Pepin le Bref ("Pepin the Short"). Pepin was a pretty good king, but was overshadowed by his war hero dad and his son: Charlemagne, who was a fantastic king. A state identifiable as France began to form.

Unexpectedly kingless, the nobles got together and elected a new king: a guy named Hughes ("Hugh"), who liked to wear a little cape. (And lo, the secret origins of Superman are revealed.) The people called him Hughes Capet, Hughes of the Little Cape. His descendants were the Capetians, who, between one branch of the family or another, would rule for nearly a thousand years.

The Capetians: No capes!

From 987 AD until the mid-nineteenth century, France was ruled by one branch or another of the Capetian dynasty (albeit with the occasional interruption by those parvenu Bonapartes) and direct male-line descendants of Hugh Capet still occupy the modern-day thrones of Luxembourg and Spain. Due to Salic law, France was strictly part of the Heir Club for Men.

France has the bizarre and unenviable position of having no less than four claimants to the throne of France, each representing different dynastiesnote See Here

. Of course, given what they did to the last bunch... Hilariously lampshaded in John Steinbeck's The Short Reign of Pippin IV