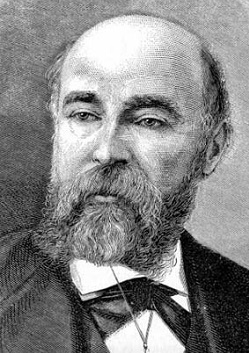 "That insignificant literature sometimes has higher aspiration, but it never declares them, and that is the secret of its power."
(Faval's defence of popular literature)
Advertisement:

He was the author of popular swashbuckler novels such as Le Loup Blanc (1843) and the perennial best-seller Le Bossu (1857). He also penned the seminal vampire fiction novels Le Chevalier Ténèbre (1860), La Vampire and La Ville Vampire, and wrote several celebrated novels about his native Brittany and Mont Saint-Michel, such as La Fée des Grèves (1850).

Féval's greatest claim to fame, however, is as one of the fathers of modern crime fiction. Because of its themes and characters, his novel Jean Diable (1862) can claim to be the world's first modern novel of detective fiction. His masterpiece was Les Habits Noirs (1863–1875), a criminal saga comprising eleven novels.

After losing his fortune in a financial scandal, Féval became a born-again Christian, stopped writing crime thrillers, and began to write religious novels, leaving the tale of the Habits Noirs uncompleted.

Works by Paul Féval on this wiki include: