Man in the Iron Mask 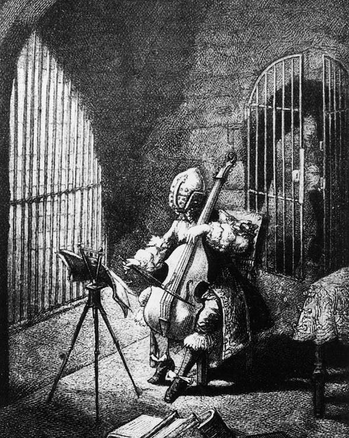 My noble half-brother whose throne I usurped will be killed, not kept anonymously imprisoned in a forgotten cell of my dungeon.
— Evil Overlord List, Rule #3
Advertisement:

(If you're looking for the novel, see The Three Musketeers)

So you've usurped your noble brother/half-brother's throne and your control is complete. Seems like the thing to do is to kill him and bury the corpse in a pauper's grave. But you're a nice Evil Overlord, so you opt simply to throw your brother, the one person who could cast your authority to rule your entire empire into doubt, into prison (or a monastery) and forget to tell anyone that he's your brother.

Of course, the hero discovers that the noble half-brother is still alive and frees him, restoring order to the kingdom, making the reader ask Why Don't You Just Shoot Him? before the hero shows up?

Sometimes this is justified on the grounds that shedding Royal Blood has side-effects, or that the land will suffer if the rightful king dies. Non-magically speaking, it could be that Even Evil Has Loved Ones and the Evil Prince is not evil enough to turn into a new Cain or the rightful ruler voluntarily went into exile as part of a deal and I Gave My Word because Even Evil Has Standards.

The essential criteria for this Plot trope:

Contrast Hidden Backup Prince, who is a similarly hidden rightful heir, but for protection from their enemies.