Literature / A Witch Shall Be Born 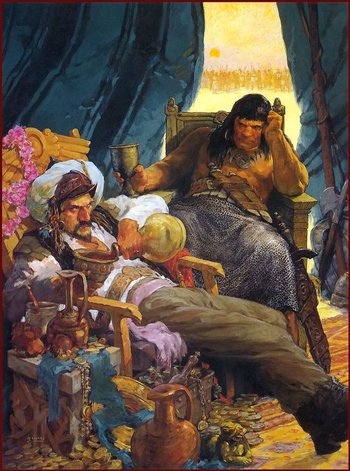 "You know how to reach the dungeons from the palace, Constantius?" said the witch-girl. "Good. Take this spitfire and lock her into the strongest cell. The jailers are all sound in drugged sleep. I saw to that. Send a man to cut their throats before they can awaken. None must ever know what has occurred tonight. Thenceforward I am Taramis, and Taramis is a nameless prisoner in an unknown dungeon."
Advertisement:

"A Witch Shall Be Born

" is a Conan the Barbarian story written by Robert E. Howard. First published in December, 1934.

Queen Taramis is woken in the middle of the night by a woman looking just like her, who reveals that she is Salome, Taramis' twin, and the born witch who stems from the curse on the royal family. She has let in an unscrupulous mercenary captain Constantius, and with his aid, seized the city and exiled Taramis to the dungeon.

Conan, the captain of her guard, is crucified by Constantius and rescued by wandering bandits. Meanwhile, Valerius, another soldier, hid despite his injuries, and in due course discovered the truth of why the queen had suddenly taken to the depths of evil. When Conan, after taking control of the bandits, stages an attacks, Valerius leads a rescue party and brings out the queen. In desperation, Salome unleashes a monster upon the city, but Conan and his forces vanquish it and kill Salome. Constantius is then crucified by Conan as the story ends.

The crucifixion scene was later used as inspiration for a similar scene in the film.

Tropes used in this story