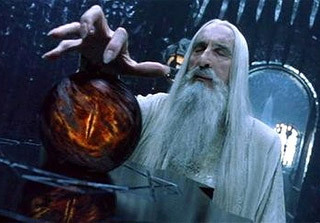 The palantír! Great reception, guaranteed no signal interference, and free evening and weekend calls!
"I don't need help, it's obvious what this means: there's going to be loads of fog tonight."
— Ron Weasley looking into a crystal ball, Harry Potter and the Prisoner of Azkaban
Advertisement:

Common prop used by witches, Fortune Tellers and psychics (and Magical Romani) for fortune telling, scrying, and long distance communication. Most commonly it's a dinner plate-sized sphere of clear glass, but these can be of just about any size and material, so long as they're shiny.

Despite the ubiquity of the classic crystal ball, there are many, many alternative ways to tell the future or view remote locations. Pools of water are mystic favorites, as are thrown bones, giblets, and of course Magic Mirrors.

The library in the Boiling Isles uses crystal balls instead of computers. They even have lousy connections.

The library in the Boiling Isles uses crystal balls instead of computers. They even have lousy connections.