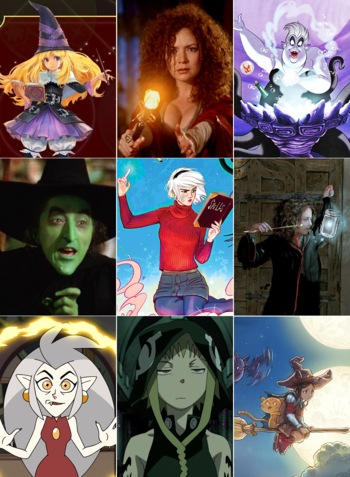 Which witch is which?
Top row: Lillet Blan, Truatha, Ursula.
Middle row: the Wicked Witch of the West, Sabrina Spellman, Hermione Granger.
Bottom row: Eda Clawthorne, Medusa Gorgon, Pepper.
They say that I'm a witch
And that I weave a spell.
Well...
I use my eyes to invite you,
My lips to delight you
And all the charms of the feminine wiles to excite you.
— Eartha Kitt, "I'd Rather Be Burned As A Witch"
Advertisement:

Like other supernatural beings, witches hold a prominent and enduring place in pop culture. Therefore, here's an index for works that focus on witches.

Just having a witch in a story doesn't qualify it for inclusion here. The witch should be one of the main heroes, the Big Bad, or otherwise central to the plot. The work must also include at least three tropes from the Witches and Wizards index.

Note that not all female magic users are witches; some are actually Magical Girls or something similar. If the character in question is referred to as a witch and/or adheres to any of the Witch Classic tropes, the work she's featured in probably belongs here.