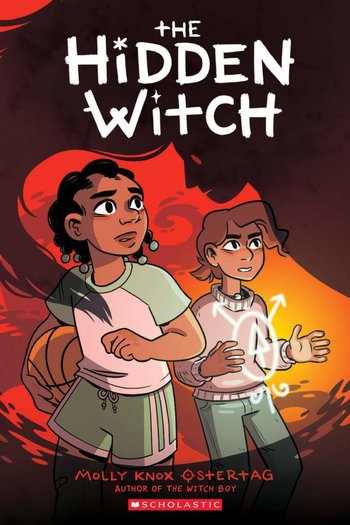 The Hidden Witch is a graphic novel published in 2018, written and drawn by Molly Ostertag, and is a sequel to the 2017 comic The Witch Boy.

Several weeks have passed since Aster's encounter with Mikasi, and he is now permitted to study witchcraft with the girls. But he has a lot to catch up on, and a formidable task ahead of him is in the curing of his estranged grand-uncle-turned-monster Mikasi. Aster is reluctant to face him again, and soon discovers he's not the only one in his family with lingering fear from Mikasi's attacks.

Meanwhile in the non-magical world, Charlie meets a new student, Ariel, a loner who's suspicious of everyone. Charlie befriends Ariel and tries to coax out her kinder side, but it turns out to be a greater challenge than Charlie expects when she learns that Ariel is under the thrall of a malevolent spirit known as a Fetch.

The comic was followed by The Midwinter Witch in November 2019, concluding the series.

Tropes found in The Hidden Witch: (spoilers for The Witch Boy are unmarked)