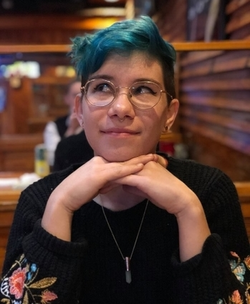 Molly Knox Ostertag (born October 28, 1991) is an American comic book artist, children's book author, and cartoon writer. Among the comics and TV series she's worked on include Strong Female Protagonist, Star vs. the Forces of Evil, and The Owl House.

Molly's own works include the graphic novel trilogy The Witch Boy and The Girl From The Sea. She also has an Archive of Our Own account here

Molly is married to ND Stevenson, the author of NIMONA and showrunner of She-Ra and the Princesses of Power.