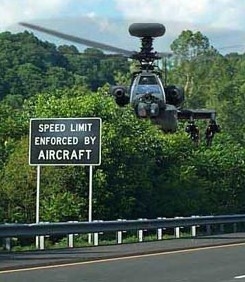 Go ahead. Floor it. We dare you.
"Revenge is a dish best served with an extra helping."
— Captain Young, Troops of Doom
Advertisement:

In some situations, it makes sense to let the opponent know that if they so much as sneeze on someone you protect, it will cost them a limb. If you have tried an eye for an eye and it really didn't do anything except help sell eyepatches, the only way to stay alive is to be drastic. Pay back any offense tenfold, or even a hundredfold if necessary, until the survivors learn to stay away and/or do everything in their power to keep you in a good mood. It's a common tactic of militaries the world over, with some regimes (such as Nazi Germany) being infamous for it.

That said, the "Justice" these rivals have in mind is more akin to a brutal beatdown... well, most of the time it is an actual brutal No-Holds-Barred Beatdown, supposed to culminate in the receiver's humiliation or death. Any attempt to get them to see the (all too obvious) truth, show mercy, or realize they're a step away from utterly ruining the receiver's life/committing murder will never succeed. It invariably takes the hero beating the rival, be it in a Cooking Duel or Good Old Fisticuffs, and proving Right Makes Might for the poor deluded soul to realize they were wrong all along, sometimes even coming around and realizing that Defeat Means Friendship.

Villains who claim that their bad past/circumstances led them to do this will likely make you realize that Freudian Excuse Is No Excuse.

All too often, these guys refuse to see reason. They promise that they'll come back to kill the hero, and shove his "mercy" and offer of friendship down his wind pipe. It might take the arrival of a plot significant character to clear things up and hand out some Epiphany Therapy to all involved.

This is not limited to the antagonist's side. God help you if that hero you've harmed has a Poisonous Friend. And all parties to a masquerade, good or bad, are often required to kill any poor schmuck who accidentally sees something he's not supposed to.

This could be what stops something from being an "act of justice" instead of an "act of vengeance". May be used as part of Cruel Mercy. A common habit for Lawful Stupid characters.

A Sister Trope to:

Other: Contrast with Unishment (a punishment that isn't a punishment at all) and Restrained Revenge (paying back a slight with retribution that is less severe than what was intended before rather than forgive the person in question). Expect the character dishing this out to justify this no matter what anyone speaks against it. Expect someone (doesn't needs be the Only Sane Man) to be Disappointed by the Motive if the retribution is just that absurdly disproportional to the reason.

See also Pay Evil unto Evil, which is what this trope can result from when done wrong, and for more proportionate responses, Laser-Guided Karma.

Any real life examples, and we'll put your fingers through a meat grinder.

open/close all folders
Web Animation
Web Videos
If you don't like this stinger, it's time to RUN. The Navy SEALs are coming.
Feedback