Music / Queen of the Wave 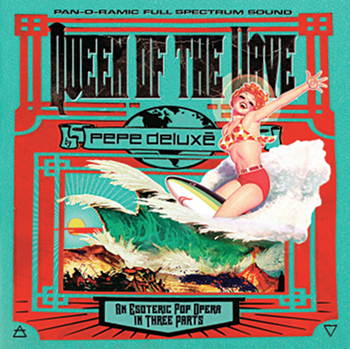 Let me sing a song for you,
let me spin a tale that's true.
A story about the days of song,
the days before the ocean won.
— "Queenswave"
Advertisement:

Queen of the Wave is Pepe Deluxé's fourth studio album, released in 2012.

The cover declares it "an esoteric pop opera in three parts", and it certainly lives up to that description. The story—adapted from the 1899 novel A Dweller On Two Planets and its semi-official 1940 sequel An Earth-Dweller's Return—concerns the heroic Zailm and the evil wizard Mainin. Their struggles play out against the decline and fall of the Atlantean empire.

Musically, the album is a fusion of numerous styles, most prominently Psychedelic Rock, Baroque Pop, and Surf Rock.

Queen of the Trope: