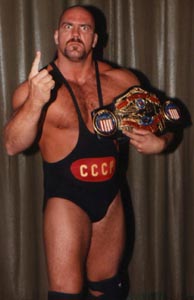 Nikita Koloff (born Nelson Scott Simpson in Minneapolis, March 9, 1959) is a retired American professional wrestler who was a top Foreign Wrestling Heel in the mid-1980s. He debuted in 1984 and was introduced as "The Russian Bear" Ivan Koloff's "nephew" just arrived from the Soviet Union. He would compete primarily for National Wrestling Alliance promoter Jim Crockett in the Carolinas and for WCW, with side trips in "Cowboy" Bill Watts' Mid-South/UWF promotion and in the AWA until he retired in late 1992. Among his in-ring achievements, he was a 1x NWA National Heavyweight Champion

"The Super Tropes of the Soviet Union":