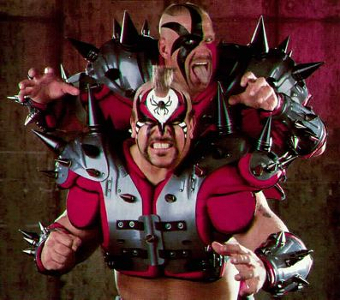 "UHHHHHH. WHAT A RUSHHHHHHH!"
Advertisement:

The Road Warriors were one of the biggest draws of The '80s and The '90s, comparable to Hulk Hogan and Ric Flair. They introduced several things into wrestling still seen today, such as their tag team finisher, the Doomsday Device, and face paint, still used today by wrestlers such as Jeff Hardy. They also popularized the Zubaz workout pants within the industry, which they helped develop with bodybuilders Bob Truax and Dan Stock.

They attempted a comeback in mid-to-late 2003 but nothing came of it. Sadly, Road Warrior Hawk (the guy sticking his tongue out) died of a heart attack on October 19, 2003. Road Warrior Animal returned to WWE in 2005, teaming up with Heidenreich, but unfortunately, the new combination didn't take off, even with Christy Hemme as their valet.

They were inducted into the WWE Hall of Fame in the Class of 2011 along with "Precious" Paul Ellering. On September 23, 2020, Road Warrior Animal died of natural causes.

"WELLLLLLLL!, the following tropes are associated with the ROAD WARRIORS!"

"We snack on danger, and we dine on death, and dead men don't make money!"
"UHHHHHHH, WHAT A RUSHHHHHHHH!!!!!!"