Wrestling / The Nation of Domination 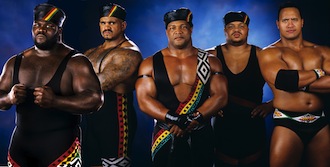 "WE ARE THE NATION! OF DOMINATION!"
Advertisement:

The Nation of Domination is a Professional Wrestling Power Stable that began in USWA in 1996 before being adopted by the then WWF at the tail end of the New Generation Era during and ended in mid-1998. The USWA version was lead by white rappers PG-13. The WWF version was formed and led by Faarooq, the NOD was a black supremacist-themed group with similar themes to the New Black Panther Party and the Nation of Islam.

The original WWF members were Faarooq, Clarence Mason and PG-13, joined later by Crush, Savio Vega and various nameless Mooks, with one devoted disciple standing out by the name of D'Lo Brown.

A loss to The Undertaker, in part due to Crush and Vega's bickering, caused Faarooq to fire the entire group except for D'Lo. Deciding that he wanted a "Bigger, Badder, Better and Blacker" NOD, Faarooq recruited Kama Mustafa, Ahmed Johnson (before getting kicked out due to Faarooq's ego and his own injuries), Rocky Maivia and eventually Mark Henry. Vega and Crush would form their own stables, Los Boricuas and Disciples of Apocalypse respectively, creating the "Gang Wars" storyline.

After WrestleMania XIV, Faarooq's role as leader was usurped by Maivia, now going by "the Rock", and he was attacked and kicked out by the other members. The group dropped the militant attitudes and renamed themselves The Nation. Kama would become The Godfather and Owen Hart would become a member.

Owen would leave the Nation months later and "retire" after he injured Dan Severn in a match. D'Lo and Henry, both jealous of the Rock and the Godfather's popularity with the fans, would kick both of them out a week later. The Nation was no more and D'Lo and Henry's partnership ended with Henry turning Heel on D'Lo months later.

Rocky Maivia explains how the fans turned on him when he was a Face, so he is turning on them.

Rocky Maivia explains how the fans turned on him when he was a Face, so he is turning on them.