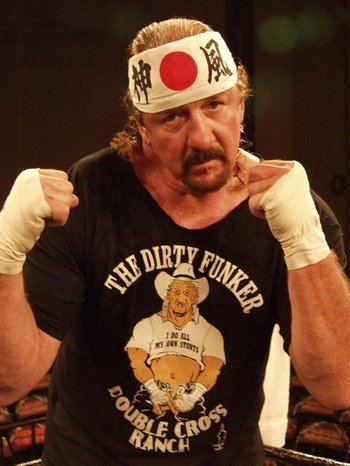 "Crazy. Th...th...That can't be an act. That CAN'T be an act. It's either the greatest work in the history of the business, or that man is a little nuts."
—Joey Styles, Forever Hardcore: The Documentary
Advertisement:

Known as "The Hardcore Icon" and "The Funker", Terrence Funk (born June 30, 1944) is a semi-/maybe retired American Professional Wrestler who is a former NWA World Heavyweight Champion

, a pioneer of the hardcore style in North America, and one of the ECW Originals. He also has made appearances in Japan with AJPW and (around 2011) NJPW and Frontier Martial-Arts Wrestling (FMW), as well as in Puerto Rico with the World Wrestling Council (WWC), the WWWF/WWF/WWE and WCW (both during the later NWA/WCW days and near the end of WCW's run), as well as MLW, SMW, Ring of Honor, TNA, Juggalo Championship Wrestling, Pro Wrestling Guerilla and MANY others.

He's known as a member of the Funk Wrestling Family, which includes his late father Dory Funk Sr. (May 4, 1919 – June 3, 1973) and his older brother Dory Funk Jr. (born 1941). (As a bonus, Terry and Dory Jr. are the only brothers to date to ever hold the NWA World Heavyweight title.) In addition, there is his acting resume, starting with Paradise Alley in 1978.

He may not look like much, but he's taken bumps men a third his age would not consider, let alone attempt. While not quite the living embodiment of hardcore (that would be Abdullah the Butcher), he ranks pretty close; the Funkasaurus is a walking museum, proselytizing the heritage of the sport as it originated in mid-20th century fairs. Unsurprisingly, he has a love-hate relationship with modern pro wrestling, despite numerous attempts to break into it (even making light of his hypocrisy in Forever Hardcore). He was inducted into the WWE Hall of Fame in 2009.

Oh, and too many Ten Minute Retirements to count. He was last noted to have partnered with The Rock 'n' Roll Express against Jerry Lawler, his son Brian Christopher and Doug Gilbert in 2017, so he's a Long Runner, too (if not the LONGEST-runner).