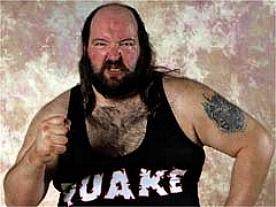 Tenta made his in-ring debut in All Japan Pro Wrestling in 1987 under his own name, and also competed in the Universal Wrestling Alliance

promotion in British Columbia, Canada. As Earthquake, he had significant singles feuds with Hulk Hogan, The Ultimate Warrior and Jake "The Snake" Roberts. In summer 1991, he teamed regularly in six-man tag team matches with The Nasty Boys (Jerry Saggs and Bryan Knobbs) against Tugboat (Fred Ottman) and The Bushwhackers (Luke and Butch), until the June 15 (taped May 28) episode of WWF Superstars, which featured Ottman turning heel, leading to him being reintroduced as Typhoon and he and Quake forming the Tag Team The Natural Disasters the following week.

. The Disasters turned face after their manager "The Mouth of the South" Jimmy Hart sided with Money Inc. ("The Million-Dollar Man" Ted DiBiasenote who had to that point been managed by "Sensational" Sherri Martel and Irwin R. Schyster) after they defeated the LOD for the belts. The Disasters defeated Money Inc. for the belts in a dark (non-televised) match on July 20 in Worcester, MA, at a taping for the August 8th episode of WWF Superstars. Money Inc. regained the belts on the November 1 (taped October 13) episode of WWF Wrestling Challenge. They also defeated George and Shunji Takano for the SWS (Super World Sports in Japan) Tag Team Titles

on April 17, 1992, losing them to the Natural Powers (King Haku and Yoshiaki Yatsu) the next day. During a break from WWE in 1993, he went back to Japan to compete for the WAR (Wrestle Association R)

promotion, usually wrestling with or against King Haku and made some appearances for West Coast Championship Wrestling in British Columbia and for CMLL.

He returned to WWE in January 1994 and left after being Kayfabe injured by Yokozuna. He went back to WAR and also teamed with Super (Big Van) Vader for two matches for the "shoot-style" UWFi (Union of Wrestling Forces International) promotion before debuting in WCW as Avalanche at WCW Halloween Havoc 1994. After an unsuccessful run there from October 1994 to early 1997, he resurfaced in WWE in May 1998 as the masked Golga of The Oddities.

Tenta died of bladder cancer in 2006, after having experienced a new wave of online support via his friendship with WrestleCrap founder R.D. Reynolds. Reynolds' tribute to Tenta can be found here

Not to be confused with the movie Earthquake.

The following tropes register a 10.0 on the Richter Scale: