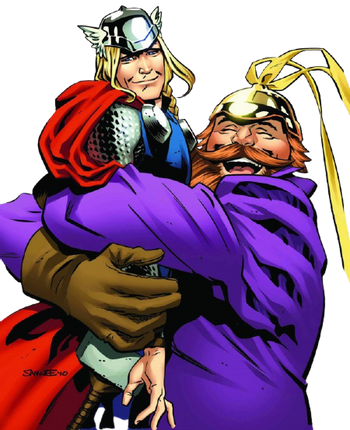 The Hug of the Gods!!!
"This Pokémon has the habit of hugging its companions. Many Trainers have left this world after their spines were squashed by its hug."
— Pokédex entry for Bewear, Pokémon Sun and Moon
Advertisement:

The standardised, FDA-approved display of affection for The Big Guy (especially if s/he is a Gentle Giant and/or a Boisterous Bruiser), this consists of the hugger grabbing someone — or multiple people, if necessary — from behind (usually) with a big, sweeping motion and pulling them close (sometimes lifting them off the ground entirely), with the hugger's arm(s) wrapped tightly around the huggee's neck and/or shoulders. Being The Big Guy is not actually required, but having a large "stage presence" (whether it stems from size or sheer charisma) helps make this more convincing.

Note that this is as much a means of displaying the character's dominance/strength as it is of showing that they're just a big ol' teddy bear, and like its cousin The Glomp, is oftentimes far from consensual; the huggee often doesn't appreciate being manhandled by somebody twice their size, and you can tell a lot about a character based on whether they give in to the hugger's crushing embrace or struggle helplessly to escape. If the hug goes on for too long, expect cries of "can't... breathe..." or something similar. Despite all this, there is often little-to-no risk of actual physical injury unless the hugger Does Not Know His Own Strength on top of being overly affectionate, in which case the odds of Amusing Injuries being inflicted vastly increase.

This is Truth in Television, as any real life Gentle Giant (or a close friend of one) will tell you.

Similar to The Glomp, but with less full-body tackling and a far higher risk of asphyxiation. Unrelated to bears in general as a trope, though they can coexist in very specific circumstances. Like many tropes, can be deconstructed to horrifying effect. Compare Smack on the Back. If a bear hug is weaponized, that is a Killer Bear Hug.

They're both fairly slim and unremarkable to look at, although, in another book, the Doctor lifts Fitz up in a rather effortless Bridal Carry, so he's kind of got that Muscles Are Meaningless/Waif-Fu thing going on.