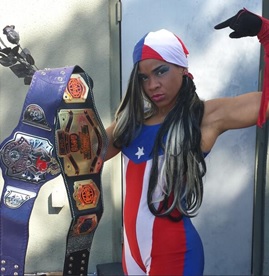 As PWS Bombshells and Ring Warriors Battling Bombshells Champion
"I have no limits, until you disrespect me."
Advertisement:

Born in Dorado on Borinquen and hailing from Caimito, San Juan, Nilka García Solís (born November 14, 1981) swam at the Puerto Rican Naval base, performed at PR & El Show del Medio Dia as a dancer, got roles on El Casco de San Juan and El Show de Sunshine Logroño as an actress, appeared in music videos for companies like Saavedra Productions, served as a trainer for Body Fit Concept on Canal 7 Tele Isla and The Spot in West Park Florida, and established Labusadora Training Center back in Puerto Rico. She fought as a boxer for two years before training for mixed martial arts and professional wrestling with El Profe, Ricky Santana, Tommy Diablo and Carlos Colón.

As far as professional wrestling goes, she also got training from Pablo Márquez and debuted in 2003 as Black Rose, managing clientele ranging from Street Fugitives to the affluent Huracan Castillo Jr in WWC, New Revolution Wrestling Lucha Libre and other organizations that became tied to the World Wrestling League. She also wrestled in the Puerto Rican half of the International Wrestling Association and captured WWC's women's title four times.

La Rosa Negra later wrestled in the continental USA for then NWA member Ring Warriors, where she was the first to hold their Battling Bombshells Title and represented them with it in various Canadian, Dominican and Bolivian promotions. She also won the Pro Wrestling Syndicate Bombshells title and later became the first holder of the PWS Bombshells Majestic title. She's also worked with Florida boxer Noemi Bosques in SHINE and FUW, fought in Mexico's LLF, been through several Japanese promotions, winning the High Speed Championship belt at World Wonder Ring ST★RDOM, the CWS Women's belt back in Puerto Rico, then the Mission Pro Wrestling title belt and Magic City Wrestling Women's Title belt in the States.

She's not to be confused with the masked Rosa Negra of CMLL nor The Black Rose Nikki Adams of the same PWS and Valkyrie promotions. Or the female lead of the first generation of .hack games either.