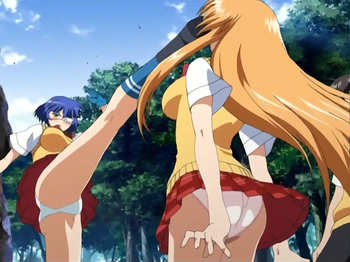 The high frequency of Panty Shots and Clothing Damage are justified artistically.
"The spirit of the legendary San Gokushi Period (panties) is alive and well within a secret (panties) system of High School warriors, skilled (boobs) in varied styles of martial arts and constantly (panties) at war with one another. [...] And yes, that's exactly what watching this show is like."
— JesuOtaku's summary of Ikki Tousen
Advertisement:

Basically, any series with a heavy emphasis on nubile teenaged girls involved in martial arts, or other forms of combat. Their age can vary from highschool to college. Either way, they'll mainly fight in school uniform to further entice the audience. Also, expect Clothing Damage to be frequent and inevitable, as will upskirt camera angles, close-ups of bouncing breasts, cleavage, and so on. If any of them favors kicks, so much the better.

The cast is likely to be predominantly female to facilitate as much eye candy as possible, or the setting will be at an All Girl School. The plot itself will usually (but not always) center around some sort of tournament, or an ongoing feud between different highschools to justify the need for so many combat ready schoolgirls. Though they can just as easily be junior agents serving under a team of adults.

Compare and often overlaps with Catfight because Girl-on-Girl Is Hot. Contrasts with Designated Girl Fight, which is when writers restrict females on opposing sides to fighting each other, to prevent violence between men and women. Compare Modesty Shorts, which has the girls wear shorts under their skirts to prevent this.