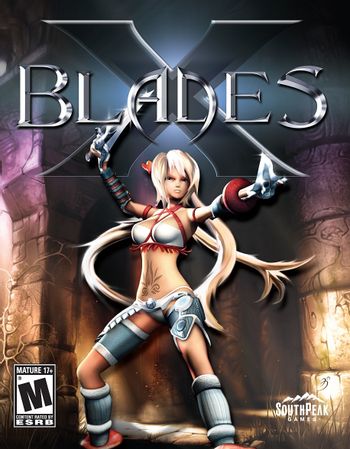 X-Blades (originally titled Oniblade) is a Russian Hack and Slash Panty Fighter Action-Adventure game about the wielder of the titular weapons, Ayumi. Ayumi is a treasure hunter, always on the move and from one of her journeys she bought an artefact along. Said artefact has an equal, which she finds in the dimly lit shop of an old trader, who promptly gets plunged into the darkness when Ayumi accidentally combines the two parts. After killing the now summoned demons, she finds out that the two parts are a map to an ancient temple full of treasure along with a godly artefact (and monsters). Needless to say, Ayumi heads out immediately.
Advertisement:

This is where the player jumps in. Taking control of Ayumi and her two swords which can also shoot and takes on hordes of enemies, finds various small artifacts to boost Ayumi's powers and generally escape from death traps. Along the way she meets a guy named Jay who then and when helps her in battle. His forte is light magic, which is either a blessing or not for the by now cursed Ayumi. What happens to him depends on your choice of magic.

X-Blades was developed in 2009 by the Russian developer Gaijin Entertainment (yes, that Gaijin of War Thunder) based on the game Oni Blade, to which it is mostly an update in terms of graphics and gameplay. Blades of Time, also made by Gaijin Entertainment is something of a spiritual successor with the inclusion of a Time Control mechanic. It was released for Playstation 3 and Xbox 360 on February 6th, 2009, and for PC on February 9th, 2009.

Not to be confused with X Blade, the manga, or the χ-blade from Kingdom Hearts.