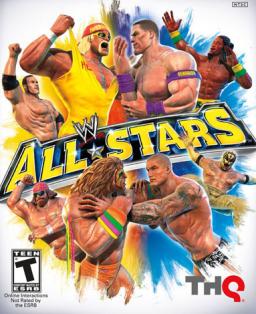 WWE All Stars is a 2011 wrestling game developed by THQ San Diego. In a departure from THQ's annual Smackdown Vs Raw series, All Stars takes a more arcade heavy slant with a comparatively smaller roster of current WWE Superstars and Legends in a wrestling/Fighting Game hybrid with exaggerated physiques and moves.